The Gas Pump Pastor – Jack of All Trades – Bivocational Ministers 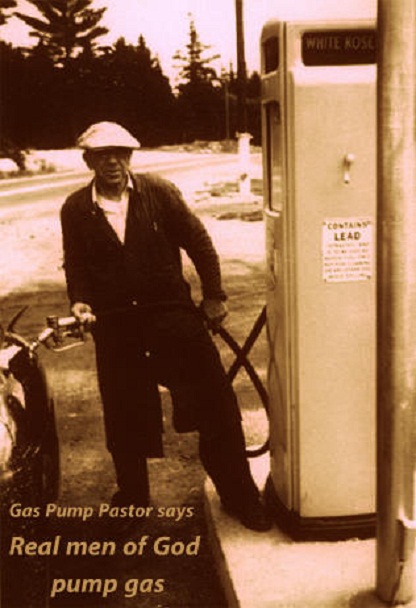 The following is a real dialog between two believers on a Facebook page yesterday. Their conversation centered on a working man that pastored a local church. I came in after the fact, but I was intrigued by the conversation to say the least. I left out their names to be cordial, but I wanted some feedback from my readers. I will comment at the end and will ask you to do the same.

FB#1 – Wavaho service station on Hwy 31 been taken over by new owners…it is truly a SERVICE station now and they Pump your gas! The best part is the owner is a wonderful, humble CHRISTian man, who is also a pastor here in town. I wanted to ask you to please patronize their business . . . thank you so much He is really a nice guy.

FB#2 – If this guy is pumping gas all day he has no time to be in the Word in order to Pastor the flock which Christ gave him…divided loyalties…read 2 Tim 2 :2-6

FB#1 – He actually has guys working for him who pumped but he did too…Paul was a tentmaker…lots of people are called to be vocational . . . Come and buy some gas from him, you will be blessed!

FB#2 – No question about being blessed, that is not the issue . . . the issue is 2 Tim 2:2-6 and Paul was a tentmaker and traveled as an evangelist – not a pastor growing his flock. I doubt if MacArthur would be able to teach us or be as grounded in the Word if he were running a business and pumping gas. If his calling is as a Pastor then that is what he should do. If his calling is as an evangelist in a gas station as an outreach then he should do that, but being a “jack of all trades’ really means you are a master of nothing. Seems like he needs to go before the Lord and figure out which way he is being called.

FB#1 – I trust GOD has given this man at the service station who is busy serving HIM the grace to pastor his flock.

FB#2 – We are all called to be evangelists, aka missionaries. But there are those who are specifically “called” to be Pastors or Elders or deacons, and just tossing aside the Word of God to pat a brother on the back for pumping gas and also witnessing is not justifiable – what does the scripture say? Clearly there are Pastors and Elders and missionaries who function as such . . . all I am saying is that this guy needs to figure out which he is. As a Pastor can he visit the sick, study the Word, teach his Elders, pray with his leaders, run Wednesday prayer meetings  (if they have them) AND care for his wife, children, etc. all while effectively running a business in which yet more people are counting on him to be just as committed? If so I would like to see that and the verses he has built this doctrine on.

FB#1 – Love you sis, we will just have to agree to disagree dear sis! Thanks for sharing your convictions!

FB#2 – Thanks, but these are NOT my convictions…this IS what the Word of God says . . . It stands or falls on that. If anyone really loves this guy they should drive on over, buy some gas and share some real truth with him – i.e. James 1 and Eph. 4

After reading their back and forth I then commented.

Darrell Creswell  – My father pastored some very small churches when I was growing up and had to work full time as the church was not large enough to support our family, as he was a church planter starting over 15 churches. I commend men of God who shepherd small flocks and pay for the privilege of doing so with their own labor outside of the ministry. It takes quite a man to work a full time job and build a church. All churches start out small and there has to be someone who will humbly take it upon themselves to undertake that huge task of serving, as no church when starting out has the finances to support a full time pastor.

I say God bless this man who is pumping gas and pastoring this small church in Alabama. Currently in the United States approximately 30% of all churches have a pastor working a full time job as the churches cannot financially support him. They are called bivocational ministers. My father was one of those men. He ministered in out-of-the-way places, far from the spotlight. In addition to working a full time job, he preached Sunday morning, Sunday night and Wednesday night. He was the janitor, cleaned the toilets, vacuumed and scrubbed the floors, cleaned the church and mowed the lawn. He pastored and planted churches, took mission trips every year, physically and financially helping to build 10 churches in Mexico and 5 here in the USA. He did all this by working 40-60 hours a week in addition to being a pastor. I guess you could say my dad was a “jack of all trades” – the Kingdom of God needs more of them. Without them, many small churches would close.

I am not aware of the Biblical foundation from the scriptures that FB#2 was quoting about bivocational ministers, but I am open to anyone that would care to enlighten my thinking. Let me know your thoughts.

Like Loading...
‹ A Collection of Bible Verses – Scriptures in Pictures to Lift, Comfort and Encourage
Jesus Is The Answer – But What Is The Question? It’s All About Him ›