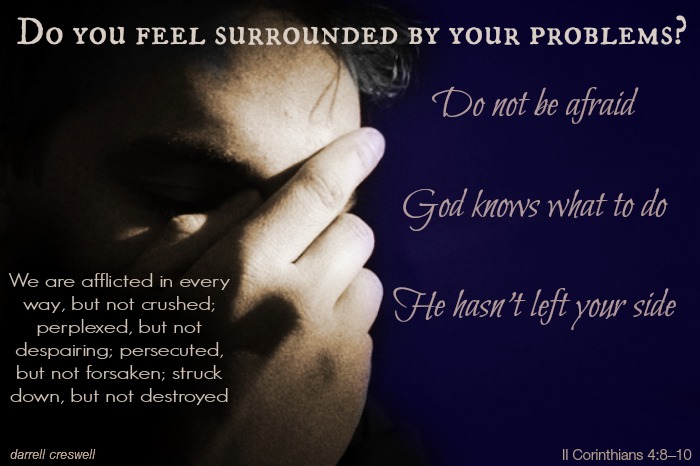 I met a man named Jared this week that told me his incredible story. I noticed that he was limping and I asked him if he had injured his leg. He began telling me his unbelievable story.

Earlier this year, he was in a retail store shopping. He was standing at the check-out counter when he felt something push him from behind. The next thing he was on the ground and a car was above him. A driver had lost control of their vehicle, and plowed through the front of the store running him over in the process. The car had broken his hip and leg.

Jared had struggled over the last year financially as his business has fallen on hard times and he had become quite distraught as he struggled to make ends meet. As he rode in the ambulance on the way to the hospital, he wondered what he was going to do. Not yet knowing the extent of his injuries, he knew that he would be out of work completely for quite some time.

As the doctors examined him in the emergency room they decided to give him a full body CAT scan to see if he had any internal injuries. It was at that time they discovered the life threatening aneurism near his heart. An aneurysm is a balloon-like bulge in an artery. Arteries have thick walls to withstand normal blood pressure. However, certain medical problems, genetic conditions, and trauma can damage or injure artery walls. The force of blood pushing against the weakened or injured walls can cause an aneurysm.

When an aneurism ruptures and bursts it causes dangerous bleeding inside the body. The split causes bleeding into and along the layers of the artery wall. An aneurism is often fatal. The doctors told him that he had the aneurism a long time, and according to the size of it, he should have already been dead. The car hitting him had saved his life as the CAT scan enabled the doctors to see his life threatening condition. He was taken into emergency surgery where doctors repaired the aneurism, saving his life.

As we talked he told me that up until that time he had never believed in God, but he had an instant change of heart, believing that God’s grace had saved his life. “God works in mysterious ways, look how he found me” he said with a twinkle in his eyes and a big smile on his face. Pain and suffering notwithstanding from the injuries from the car wreck, he was given a handsome settlement from the insurance company.

He had found a verse in the Bible that he quoted to me from Genesis 50:20 saying, They intended to harm me, but God intended it for my good to save my life. Even though he did not quote it exactly right, it works for him and it sure worked for me, touching my heart – bringing tears to my eyes.

I never tire of listening to stories of God’s mercy and saving grace touching and saving people’s lives.

2 Corinthians 4:8-10  We’ve been surrounded and battered by troubles, but we’re not demoralized; we’re not sure what to do, but we know that God knows what to do; we’ve been spiritually terrorized, but God hasn’t left our side; we’ve been thrown down, but we haven’t been broken. What they did to Jesus, they do to us – trial and torture, mockery and murder; what Jesus did among them, He does in us – He lives!

So even when things are looking bad, never give up. Even though on the outside it often looks like things might be falling apart, look on the inside where God is making a new life for you. Not a day goes by without his unfolding, life-saving, renewing grace.